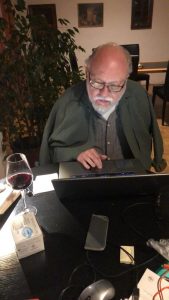 I would like to run every second Saturday a kind of social meeting in the evening.

Thank you very much. It’s perfect.

As mentioned in the “Terms of Award” agreement, we would kindly ask you to submit your final report on your activities, travels, talks and accomplishments during your research stay. Please be as specific and concise as possible!

In particular, we may ask you to list books or essays that have been written or worked on at the IWM, that have either been published or accepted for publication or that you wish to submit for publication. Describe briefly the nature of the work and give names of publishers or publications, dates and other relevant facts.

We would be very grateful if you could provide us with a copy of your publication(s) for our library or, if this is not possible, contact our librarian with the publication details. We would also like to ask you to list any prizes or awards you have received or will receive, as well as any scholarships and grants you have received or will receive.

I was interested in history ang history of culture books concerning Austrian Empire periphery in xix c., in particular, on Western Ukraine.  I could summerize my reading shortly,

What is the secret of Czernowitz which produced a dozen of outstanding figures, in particular in literature? They wrote in different languages and got a reputation of classics. Yes, Czernowitz was a cross-road of languages and cultures but it was not unique in that respect. What do have in common Romanian poet Michai Eminescu, Austrian writer Karl Emil Franzos and Ukrainian Yuri Fedkowitch, writer, poet, folklorist and translator? The answer could reveal the source of Czernowitz phenomenon. All of them were school children of Ernnst Neubauer. When revolution in Austria (1848/1849) failed, E.Neubauer, a bright  intellectual and active dissident, was exiled for „reeducation“ to a periphery of Empire, in Czernowitz. He was a person of colossal creative energy. His school lessons inspired hid pupils. Later he founded a first German- speaking periodical Bukowina, a cradle of young gifted authors. Study of E.Neubauer heritage could throw light on dynamic of Bukowina culture of the second part of XIX century and further its development.

As for other grans and rewards, I worked for radio for 40 years and could not afford searching for grants or scholarships Radio is an intensive job. Now I am a free-lance and it makes my life more loose and free. As for rewards I have half a dozen literary prizes including those for essays. Most of them were given to me in Russia and Ukraine.